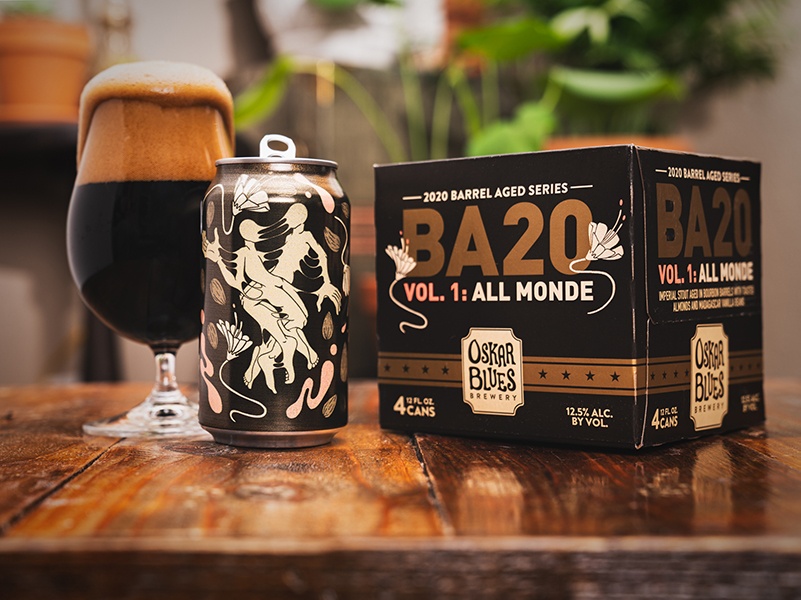 Raymond Melendez
Featured
April 2, 2020 1 min read0
Oskar Blues Brewery has always operated within strong and deeply interconnected communities. Now more than ever, the health and wellness of our local communities and our nationwide community are our highest priorities. For the latest Covid-19 related updates from Oskar Blues, please click here.

Oskar Blues Brewery announces the BA20 series, a pantheon of limited release barrel-aged beers. The inaugural entry, All Monde, is being made available nationwide in 4-packs of 12 oz. cans starting now.

After experimenting for years with small-batch barrel aged beers and the nationally-distributed Bourbon Barrel Aged Ten FIDY Imperial Stout, Oskar Blues brewers were stoked to receive a new tool in their brew kit – the Spinbot 5000. The brewers jam Spinbot full of premium ingredients, then circulate beer through it for hours or days at a time for maximum flavor transfer.

To make All Monde, BA20 Volume 1, the shiny new Spinbot is packed with toasted almonds and Madagascar vanilla beans. A big time imperial stout racked in bourbon barrels for nine oaky months is swirled through until the nutty and sweet flavors are maximized to their full potential. The result is a barrel aged imperial stout with the toasty almond and vanilla flavor dials turned to eleven.

For this new series, Oskar Blues diverges from their classic can designs, calling on trippy illustrations in earthy tones, accented by gold lids. Melty, psychedelic figures groove together around a jumble of vanilla flowers and almonds – a hint at the beer’s all-star ingredients.

All Monde is the first of four volumes in the series to be released in 2020, all of which will revolve around barrel-aged boldness and choice ingredients. Future entries in the BA20 Series will be announced later this year. In the meantime, look for All Monde on shelves nationwide in 4-packs of 12 oz. cans starting now. Please direct questions to Aaron Baker at aaron@oskarblues.com.