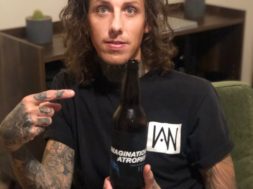 Here we have another beer from German brewery Brauhaus Riegele, this time their Speziator Hell, which is a Doppelbock coming in at 8.5% ABV. Dstrongoppelbock as you know is a stronger and darker version of the Bock type beer. Here is what we thought of this one in particular.

Appearance: Dark yellow tint as you pour it into your glass. Has a foamy white head that goes away quickly, yet as you drink the beer there’s a good amount of lacing left. We tried this in a pint glass.

Taste: The bitter grainy taste is the first thing that hits the palette, followed by a slight hint of hops. There is a mild spice flavor throughout with honey finish to it. Starts out bitter, as stated before, but the more you drink the better it tastes.

Smell: Much like the taste, it is light in smell. There is a grainy smell to it, as well as a light hop and honey scent at the end, which gives it a crisp finish.

Mouthfeel: Light, bitter mouthfeel with a lot of carbonation in the beer. Mild almost tart mouthfeel at the end of this beer.

Overall, this beer was enjoyable with a rough start at the beginning. As stated above, the more you drank it the smoother the taste profile was yet still light and refreshing throughout. Definitely a beer to enjoy on a hot day, during these cold months you’ll really feel the crisp taste.

INFO@BEERALIEN.COM
We are hard working aliens trying to survive on planet Earth.

GOT SOMETHING YOU THINK THE BEER ALIENS NEED TO KNOW ABOUT?

SEND YOUR PRESS RELEASES TO:
INFO[AT]BEERALIEN.COM